Kerala is home to a stunning variety of art forms. ‘Kathakali’ the most popular art form in which the entire body is used to portray a story. The Kathakali artists wear elaborate costumes, ornaments and facial make-up. ‘Mohiniyattam’ the dance of enchantress and ‘Kalaripayattu’ the amazing martial art. 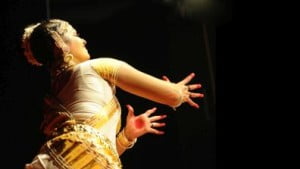 Kerala Kalamandalam “A day with the Masters”.

Thrissur is best known for its mammoth Pooram festival held in the Malayalam month of Medam (April-May). It is the most colourful and spectacular event in Kerala. Spectators from all parts of the State and even outside throng the Thekkinkadu grounds to watch the spectacle.
Introduced during the reign of Sakthan Thampuran (1775-1790), the ruler of Kochi, the Pooram is a display of strength by the two groups representing the main geographic divisions of Thrissur, Paramekkavu and Thiruvambadi. Two teams of fifteen richly caparisoned elephants each line up face to face on the vast grounds. And then ‘Kudamattam,’ a competition in the swift and rhythmic changing of brightly coloured and sequinned parasols is conducted. The whole event takes place in rhythm to the traditional orchestra ‘ Pandimelam’

Kerala owes its transnational fame to this nearly 300 years old classical dance form which combines facets of ballet, opera, masque and the pantomime. It is said to have evolved from other performing arts like Kootiyattam, Krishnanattam and Kalarippayattu. Kathakali explicates ideas and stories from the Indian epics and Puranas.
Presented in the temple precincts after dusk falls Kathakali is heralded by the Kelikottu or the beating of drums in accompaniment of the Chengila (gong). The riches of a happy blending of colour, expressions, music, drama and dance is unparalleled in any other art form.

Costume is elaborate with the face painted up. Great importance is laid on the Vesham or make-up which are of five types – Pacha, Kathi, Thadi, Kari and Minukku.

The pomp and magnificence of Kathakali is partly due to its decor part of which is the kireetam or huge headgear and the kanchukam the over sized jackets, and a long skirt worn over a thick padding of cushions. The identity of the actor is completely mutilated to create a super human being of larger-than-life proportion.

There are three types of bearded or Thadi Veshams.”Vella Thadi” or White beard for superhuman monkeys like Hanuman.”Chuvanna Thadi” or Red beard is for evil characters.”Karutha Thadi” or Black beard for the hunter.

Kari Vesham is used for she-demons.

The “Minukku Vesham” is used for female characters and sages.

Mudra is a stylized sign language used to depict an idea, a situation or a state of being. A Kathakali actor enacts his ideas through mudras. For this he follows a systematic sign language based on Hastalakshana Deepika, a treatise on the language of hand gestures.

The orchestra is formed of two varieties of drums – the maddalam and chenda; the chengila which is a bell metal gong and the ilathalam or cymbals.

Students of Kathakali have to undergo rigorous training replete with oil massages and separate exercises for eyes, lips, cheeks, mouth and neck. Abhinaya or expression is of prime importance as is nritya or dance and geetham or singing.Together with highly evocative facial expressions, the mudras and the music both vocal and instrumental, Kathakali unfolds stories from a bygone era in a lofty style reminiscent of the Greek plays. Kerala Kalamandalam , is the prominent institution imparting Kathakali training in the traditional way..

Among the classical performing arts of Kerala, Thullal is distinct with its simplicity of presentation and its frank, outspoken wit and humour. The songs are in simple Malayalam and the techniques employed in this art are not rigid, though they are based on the classical principles of Naatya Saastra, a treatise on art originating in the 2nd century B.C. it is said to have been a modification of Koothu.

The word Thullal belongs to the Dravidian family of languages and literally means jumping, this however can be extended to mean to ‘to leap about’ or to ‘cut a caper’.
Thullal is also a genre of poetry in Malayalam. It is significant that the work is composed in metres that later became the norm for Thullal poetry. This seems to indicate that the songs for Thullal dance, at least in their structure, took their inspiration from a model that was already available. Though the Thullal dance, as we know it, came into existence less than 200years ago, the roots of its verbal component can well be traced to at least one century earlier.

Thullal is said to have been organized by Kunjan Nambiar, a veritable genius and one of the foremost poets of Kerala. Oral history records that Kunjan Nambiar accompanied the Chaakiaars on the drums when they performed their heredictary occupation of dance and drama. One day, during a temple festival, when Kunjan Nambiar was playing the drum for a Chaakiaar, he made a mistake. This incensed the Chaakiaar so much that he publicly took him to task. Crestfallen, Nambiar quietly left. Seething inwardly with anger however, he returned the following day when the same Chaakiaar was performing. Altired in a manner that itself was enough to attract attention, he presently began to sing and dance. In no time the audience turned around only to lose itself in Nambiar’s antics, leaving the Chaakiaar without spectators.

The story Kunjan Nambiar presented was a familiar one, the Kalyaanasaugandhikam from the Mahabhaaratha, but he clothed it with his own words. The Chaakiaar momentarity defeated, was silent, but later took his revenge by persuading the ruler, the Raja of Ambalapuzha, to forbid Kunjan Nambiar from performing or visiting there again.

There are three different types of Thullal, classified according to the metre and rhythm of the songs sung in each one and the differences in constume and dance. They are Ottan Thullal, Seethankan Thullal and Parayan Thullal.

The sinuous dance of the enchantress, this is a distinctive classical dance form of Kerala. Slow, graceful, swaying movements of the body and limbs and highly emotive eye and hand gestures are unique to this dance form. The simple, elegant gold-filigreed dress, in pure white or ivory, is akin to the traditional attire of the women of Kerala. The origin of Mohiniyattom is rooted in Hindu mythology. Once the ocean of milk was churned by the gods and demons to extract the elixir of life and immortality. The demons made away with this divine brew. Lord Vishnu came to the rescue of the panicky gods and assumed the female form of an amorous celestial dame Mohini. Captivating the demons with her charms, Mohini stole the elixir from them and restored it to the gods. This dance was adopted by the Devadasi or temple dancers, hence also the name ‘Dasiattam’ which was very popular during the Chera reign from 9th to 12th century.

Kalaripayattu involves extremely energetic techniques of defence and attack.This comprehensive system of martial arts, regarded as one of the oldest and most scientific in the world, evolved in North Kerala. Here we have ‘Kalari’ or gymnasia where boys and girls were trained under a ‘Gurukkal’. Here they were taught a set of body exercises as well as use of weapons like ‘kuruvadi'(short stick) and ‘sariravadi’ (mace,spear,dagger,sword,shield).
‘Marmams’ were taught to the most promising of the lot. ‘Marmamas’ are vulnerable parts of the human body and a skilled person can disable or kill his opponent by a mere touch.
Indian School of Martial Arts (ISMA)

A” day with the Masters” A cultural tourism project.
Kerala Kalamandalam – which nowadays stands as a symbol of traditional classical art forms of India. Situated in a village named Cheruthuruthy in Thrissur District, Kerala State, India, this institution is unique in many ways. As a centre of learning and research for the traditional classical art forms of Kerala, Kalamandalam attracts students and scholars from both India and abroad. Kalamandalam was founded in 1930 by the celebrated poet Vallathol Narayana Menon for the preservation and promotion of the traditional classical arts of Kerala viz. Kathakali, Koodiyattam, Mohiniyattam and similar performing arts that had then been heading to extinction. The institutionalization of classical art forms was a major breakthrough in the history of Kerala’s art and culture. The poet with his characteristic foresight insisted on retaining the time-tested Gurukula system of training in the schedules of Kalamandalam. As a strictly residential-school nurturing an informal and intimate relation between teachers and students Kalamandalam soon developed into a unique center for training in and performance of the classical arts of Kerala. The training at Kalamandalam in the performing arts such as Kathakali (Acting, vocal- music, percussion-music), Koodiyattam, the traditional Sanskrit theater, Panchavadyam (the Kerala-ensemble) Mohiniyattam, the female classical dance, Thullal (the solo-dance narrative), Mridangam and Karnatic Music begin in the wee hours of the morning. After a break the classes restart at 9 A.M. and go on till noon. The afternoon classes begin by 3 P.M. and end by 5 P.M. Besides physical training the students have to learn the literature of the art concerned.

In recent times Kerala Kalamandalam has initiated a new Cultural Tourism Project titled ” A Day With the Masters”, this half-day package tour is first of its kind in the whole world. This structured and professionally managed tour of Kalamandalam will be an unforgettable experience for the visitors. This guided tour includes a three-hour comprehensive visit of the Kalamandalam campus and the old campus where Kalamandalam started functioning in 1930.

Copyright © 2016 by Uniquekerala.com -All Rights Reserved